Once upon a time, in the simpler age of 2013, 2K released a DLC pack for Borderlands 2. Titled Tiny Tina’s Assault on Dragon Keep, this expansion was creatively framed as a game inside a game, with the Vault Hunters sitting down to play a tabletop role-playing session and the flavor shifting from sci-fi to fantasy for welcome change of tone. Dragon Keep was exceptional, with the framework allowing Borderlands’ referential humor to shine without falling back on memes and pop culture gags — instead, meta-jokes around the nature of tabletop games like Dungeons & Dragons ruled the realm, while an unfolding story behind the DM screen leaned the other way and ultimately told a pretty touching tale of how Bunkers & Badasses (the game’s in-universe twist on D&D) served as a coping mechanism for pint-size DM, Tiny Tina.

Dragon Keep was Borderlands 2’s fourth and finest DLC, and while the others were all somewhere between good and great, this was genuinely superb. Like the previous packs, it offered a fairly chunky mini-campaign, plenty of side missions, loads of new gear, hardcore raid bosses, and loads more… comfortably 15-20 hours of new stuff, or way more if you ran it on multiple characters and farmed things like the raid bosses and arenas. Fans loved it and wanted more, so fast-forward to 2022 and they got their wish with the release of Tiny Tina’s Wonderlands — a full game based on the same splendid concept. With its progenitor Dragon Keep a shining example of the series’ generally solid track record with DLC, hopes were high for Wonderlands to honor its heritage with some superb additional content of its own. Those hopes died yesterday. 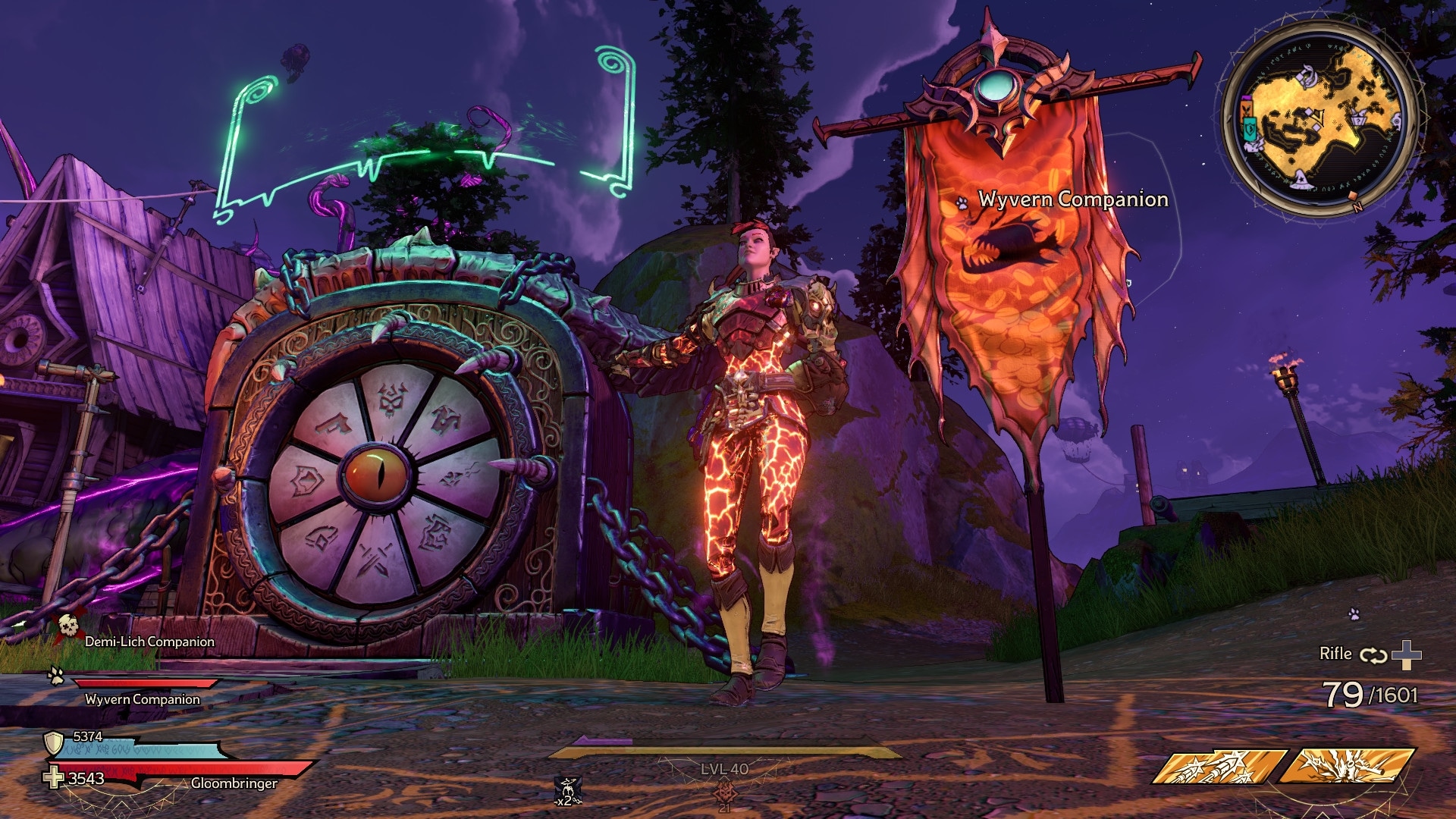 Coiled Captors, the first DLC pack for Tiny Tina’s Wonderlands, arrived yesterday, priced around the same as previous chunky Borderlands expansions but with a frankly embarrassing dearth of content with which to back up that costing. The ‘adventure’ begins at Dreamveil Overlook, a really cool haunted amusement park, but even that doesn’t win any points for Coiled Captors as it’s just part of the update — players can visit whether they own the DLC or not, although it’s little more than a thematically neat but ultimately pointless little hub area if you don’t. At the center of this area sits the above monstrosity, a slot machine built out of pure disappointment and ready to rob you of Souls (a new currency added in the DLC) in exchange for typically woeful rewards.

How do you earn Souls, do you ask? Well, after taking in the sights of this quaint little area, you’ll head over to a magic mirror. This is the first of four — each of the Season Pass’ content drops will apparently stick to this formula, with a new mirror for each — and will whisk you away to a new location where you’ll discover what it means for something to be truly devoid of original ideas or content. Coiled Captors’ entire narrative is condensed into a single short cutscene that plays as you load in, followed by what can only be described as a worse version of the Chaos Chamber — a multi-round arena combat affair against the same enemies you’ve killed countless times before, with trivial objectives and thrilling bonus challenges such as breaking barrels. At the end of this colorful ten-minute yawn, you meet Chums, the one and only boss of this mode, and he’s just a big version of the shark enemies that you shoot until he dies and then you get some stuff. No mechanics, no interesting moves, and not even much of a payout… there are some decent new gear pieces up for grabs but with the Wheel of Fate’s prizes being completely random, chasing Chaos Chamber’s targetted loot is a much better use of your time. And that’s it. That’s the DLC. That’s what ten bucks gets you these days, apparently. It’s honestly disgusting. 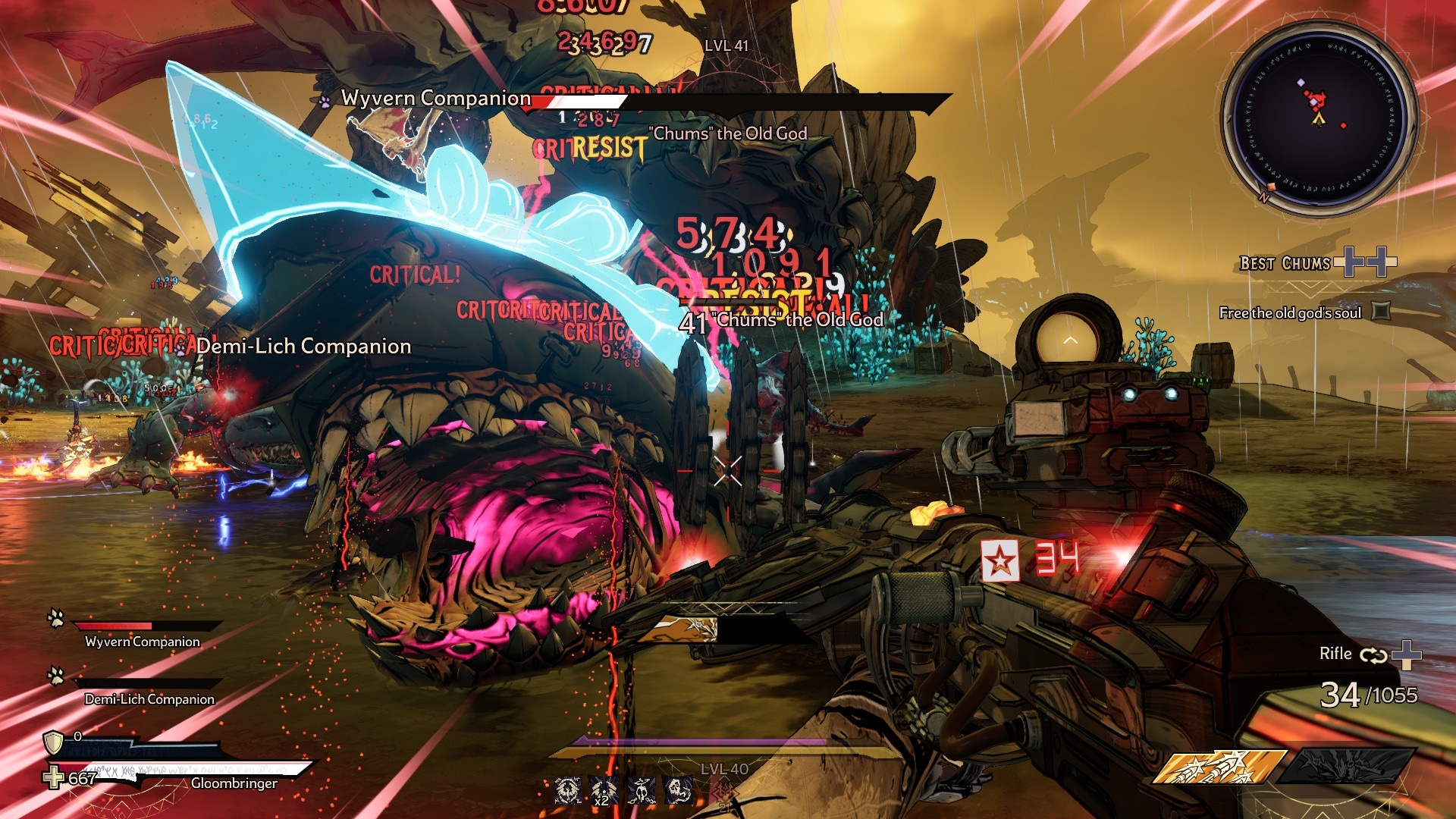 But wait, it gets worse. Coiled Captors actually has four increasingly challenging tiers with a new version of Chums available at the end of each. In a truly mind-boggling move, Gearbox has decreed that those extra tiers should be gated behind weekly resets, meaning outside of chasing some of the new loot (most of which seems to be either invisible items like accessories, or reskins of existing gear, naturally), that 15-minute run is all you get for your money before you have to wait a week to be bored to tears by it again. Amusingly, players have discovered that you can simply go offline to make all tiers available and fast-track getting the achievement for beating Chad Chums rather than waiting a month to get it.

Sure, it’s pretty neat that these areas, challenges, and bosses get added to the pool of potential things to pop up in Chaos Chamber runs, adding a little more variety to those, but this is anything but substantial content. It’s on roughly the same level as some previous expansions’ extra features — y’know, on top of things like an actual campaign — and we’ve seen much cheaper packs and even free seasonal modes deliver more game than Coiled Captors manages to, so things are looking pretty bleak for those who trusted Borderlands’ historically solid record with DLC (not you, Borderlands 3 Season Pass 2. ..) and dropped thirty bucks on the season pass. The new class that is set to arrive with the fourth pack is the silver lining there, but the thing that is being lined is a gross amalgam of this tepid gauntlet mode that is categorically worse than the one the base game already has, and three more just like it. Can’t wait. 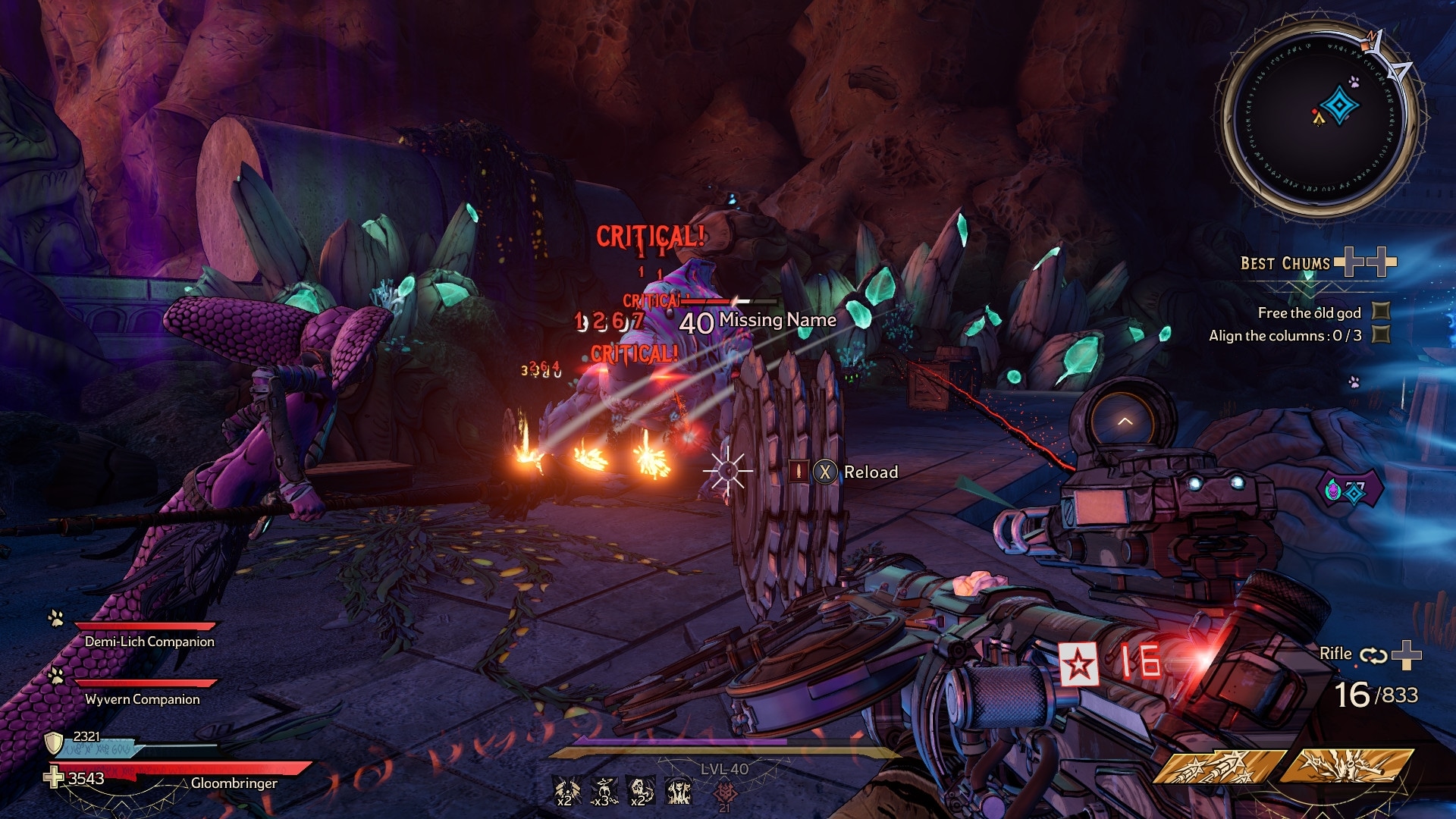 The degree of wasted potential here is difficult to overstate. D&D is a game with unlimited story potential, and basing a game on it should afford that same opportunity for boundless creativity. Wonderlands squanders that with aplomb here, to the point that its theme is even completely lost. Without any new dialogue from Tina and the rest of the all-star cast, the illusion of a game within a game is lost, and the rote repetition of tedious encounters isn’t even something that would fly at a table full of experienced role- players. It’s a grind for grinding’s sake, with its quarter-hour of content supposed to be stretched to a much longer runtime by your desire to replay it. I can tell you right now that desire will not exist. You might end up laughing through the tears at just how bad it is — from the slot machine that takes ages to spin once at a time (you even have to queue up and wait your turn to use it in multiplayer) and routinely spits out garbage to the fact that the shark enemies (pictured above) are inexplicably called ‘Missing Name,’ without so much as a joke about that to make it feel like anything more than a hilarious error — but that brutal 0.67/5 TA user rating is on the money. This is abysmal, to the point that the title update that enables it is actually better the DLC itself.

This sorry excuse for an expansion is doubly galling as it doesn’t even have the decency to bring with it fixes to major issues that have been in the game since launch. Quest tracking and achievements are still a mess (even the two new achievements — the one for beating Chums didn’t pop for me until my third kill), co-op remains a laggy oft-unplayable disaster, and you’ll still run into all kinds of issues despite several fixes. As a huge Borderlands fan, it brings me no pleasure to be the bearer of bad news like this, but hey, at least I’m not the bearer of bad DLC, merely the frustrated punter that got scammed by it. You want my advice? Wait for a sale… on something else you want to play, and never, ever consider buying this wretched thing.

The Elder Scrolls 3: Morrowind changed everything