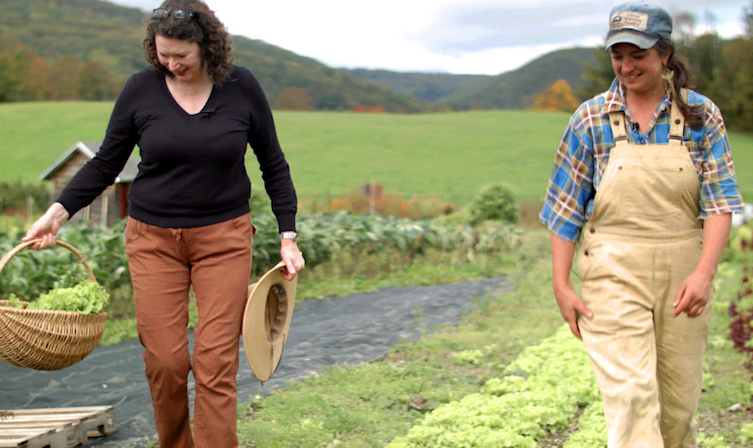 SHEFFIELD — A passion for food and farming is a given among chefs in the Berkshires. For one recent transplant, the edible natural world that abounds here has sparked an entirely new endeavor: exploring the sourcing of local ingredients and products from farmers, foragers, and makers in the Northeast from the ground up, by cultivating conversation.

“It’s a little bit addicting actually, year after year, to be able to see the results of your labor end up in both amazing food and very happy people,” says Elizabeth Keen, of Indian Line Farmpausing in her South Egremont greenhouse to talk soil health with katy sparks. Their conversation, featured in Episode 2 of Edible Natural Worldis among the first in a new foray for Sparks — to YouTube seriesproduced by Middle silothat follows her from intimate conversations with farmers to the harvest and procurement process before landing in her home kitchen.

“I want to deepen the understanding of the farm-to-table conversation by drawing a direct line from soil-first farming to that first bite of a dish cooked in my viewers’ kitchens,” says Sparks, an award-winning chef, culinary consultant and author of “Sparks in the Kitchen” (Knopf, 2005). Her recent arrival de ella on the Berkshires scene — having grown up in Vermont’s Champlain Valley, where her family de ella raised grass-fed beef and free-roaming chickens — has rekindled Sparks’ passion for sourcing local food, products, and artisanal crafts.

“I love growing food,” says Keen of her 10 acres, five of which are farmed intensively in rotation. “Two years in [growing] vegetables followed by one year off” is the basic premise of a philosophy that consistently yields bountiful crops. “Plants need nutrition, and they need a lot of it … especially if you want big, healthy, vibrant looking crops,” she explains, pointing to her affinity for active cover cropping, in each of four seasons, to achieve year-round ground cover. “[I use] some combination of grains and legumes, which take nitrogen directly from the air and put it in the soil,” Keen says of the fascinating process. Want a glimpse of Keen’s go-to choice for soil improvement? Go ahead and Google hairy vetch, Vicia villosa Roth.

“I feel like I’m going home with amazing bounty that will get the wheels turning,” says Sparks after helping Keen pull root vegetables — a panoply of carrots, parsnips and beets — from cold storage and harvesting kale, Swiss chard, radicchio and coriander straight from the dirt. At home, Sparks begins the process of turning the local produce (complemented by local products) into a pair of recipes: roasted carrots, parsnips, and beets with a yogurt, cilantro, and Hosta Hill kimchi sauce; and Swiss chard gratin with Cipollini onions from the Berkshire Food Co-op and Monterey chèvre from Rawson Brook Farm.

As on-site interviews segue to kitchen sequences, Sparks celebrates the innate qualities of her ingredients while spicing the videos with kitchen tips and techniques, flavor pairings, and discoveries that connect the viewer to the edible natural world — deepening our collective understanding of food in the process.

“Connecting farms and farmers to eaters and chefs supports our Berkshire food system and shines a light on the dedication and creativity of small-scale farmers,” says Margaret Moulton, executive director of Berkshire Grown. “[We are] thrilled that the ‘Edible Natural World’ project highlights our Berkshire farms with such beautiful images and inspiring recipes.”

Since moving to Alford in 2020, Sparks has consulted on several local food projects. In 2021, she met Beth Carlson and Kip Beacco of Middle silo and discovered a shared passion for crafters and makers. Their “Edible World” series pilot, filmed at the West Stockbridge Farmers’ Market, features Molly Comstock of Colfax Farm in Alford. The team plans to create 8–10 additional episodes in 2022.

“We see this project as having great potential,” says Carlson, citing Sparks as “a natural host with a vast array of knowledge to share.” Beacco says, “The subject matter of natural food is like art — it lends itself perfectly to producing beautiful images.” Talk about food for thought.