Medical students who identify as gay, lesbian, or bisexual view medical school learning environments less favorably than heterosexual students, and rates of burnout may be higher for these students, according to a study published today in JAMA. 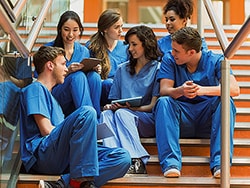 The cross-sectional analysis conducted by researchers at Yale School of Medicine evaluated deidentified data from 25,757 graduating medical students who completed the Association of American Medical Colleges Graduation Questionnaire in 2016 and 2017. The questionnaire “is an annual survey of all graduating medical students from all 140 accredited allopathic medical schools in the United States,” say the authors. The survey collects self-reported data on “student demographic characteristics, career plans, mistreatment, burnout symptoms, and perceptions of the learning environment.”

The study found that bisexual and gay or lesbian students — also referred to as sexual minority (SM) students — ranked faculty-student interactions and the emotional climate of the learning environment lower than their heterosexual counterparts did. SM students reported receiving less help from faculty and enduring “educational experiences that were less likely to provide them with a sense of achievement, value, and academic confidence.”

SM students with the lowest emotional climate scores were eight times more likely to be in the highest quartile regarding burnout symptoms.

Although many national medical associations and agencies, including the American College of Physicians and the Office of Disease Prevention and Health Promotionacknowledge the importance of SM representation among healthcare workers, progress has been slow.

“I do think there has been a push in recent years by medical schools to address burnout and learning environments, and many schools have ramped up their efforts for diversity, equity, and inclusion,” Caitlin Ryus, MD, MPH, an instructor at Yale School of Medicine and lead researcher on the study, told Medscape Medical News. However, she notes that more research is needed to understand the efficacy of these efforts over time.

Currently, fear of discrimination prevents approximately 29% of SM medical students from openly disclosing their sexual orientation, say the authors, and “a culture of heterosexism and discrimination creates non-welcoming learning environments, potentially contributing to symptoms of burnout.” Individuals who choose to disclose may encounter discriminatory actions, leading to an uptick in psychiatric disorders, substance abuse disorders, and violence and victimization.

A 2021 study published in PLOS ONE found that sexual and gender minority medical students more frequently experienced bullying and suicidal ideation. Two thirds (67%) of students expressed concern that disclosing their orientation would negatively affect their future career, especially if they were considering a surgical subspecialty, and 39.8% were advised to avoid disclosing their orientation entirely.

The authors say that a healthcare workforce that is “more inclusive of [SM] physicians…is an important strategy for addressing health disparities related to sexual orientation,” one that typically also has positive effects on patient satisfaction and an organization’s financial performance.

Medical school is an ideal time to foster this critical workforce diversity because doing so can reduce mistreatment of SM students, decrease burnout, encourage SM students to pursue a broader range of specialties, and improve retention and recruitment efforts. Faculty behavior is key in achieving a climate of inclusivity, so schools should actively recruit SM residents, fellows, and faculty who are open about their orientations, says Ryus, because “increasing access to SM faculty role models has been shown to be valuable to SM students in selecting their specialties.”

Creating an equitable emotional climate and more meaningful faculty-student interactions may reduce the risk of burnout for SM students. For example, after adjusting for the learning environment, the researchers found that the likelihood of experiencing “top levels of burnout symptoms among SM students decreased from 71% among bisexual students and 53% among gay or lesbian students to about 40% among both groups. “

“The data from our study were collected from medical students who are already graduating,” she says. “Creating a safe and anonymous way for SM students to convey their experiences when there is still time to intervene could be one strategy to mitigate burnout and improve the learning environment.”

Steph Weber is a Midwest-based freelance journalist specializing in healthcare and law.

Duke’s Klotman is under consideration as the next NIH head