When general hockey fans spew hate towards our dear Tom Wilson on social media, Capitals fans usually retort RENT-FREE. After that, they usually point out that those angry fans would absolutely love Tom if he was on their favorite team. Now we have confirmation this is true but with real-life hockey players.

The NHLPA released its annual season-ending player poll on Wednesday. One of the questions on the poll was Which player do you least enjoy playing against, but would like to have on your team?

Wilson received 10.7 percent of the vote, good for third place. You’d think he’d be higher, but the rat king, Brad Marchand (26.4 percent), who plays a very sandpaper-y game, and Connor McDavid (18.3 percent), the most skilled player in the NHL, finished ahead of him.

Hate to play against him – but would love to have him on their team. @bmarch63 (@NHLBruins) has a special mix of skill and grit that players would rather line up besides compete against. #NHLPAPlayerPoll pic.twitter.com/dGPb8j3FnM

Red Wings star Dylan Larkin was one of the players who voted for Tom. “Every time we play against him you’re on your toes looking for him all game,” he said. “I would rather have that on my side.”

Ahead of today’s #NHLPAPlayerPoll reveal, players offer up who they least enjoy playing against, but would want on their side. pic.twitter.com/xZG42qR4bC

Last Summer, Wilson was found to be the most hated player in the NHL amongst fans after a betting company used a “social listening tool” called FALCON to determine a ranking.

This season, Wilson has set career highs in goals (24), assists (28), and points (52) while also receiving his first All-Star Game nod. If Wilson avoids getting in a fight or called for a minor penalty in the Capitals’ final two games, he will stay under 100 PIMs for only the third time in his career.

In total, 566 NHL players from all 32 teams were anonymously surveyed for the NHLPA poll. The questions ranged from individual player skills, arena ice, and the best current women’s hockey player. Two other Caps stars fared well in other questions.

Ovechkin was the winner of the Which Player Do You Wish You Could Shoot Like category, finishing 29.1 percent above the next highest player, Auston Matthews. 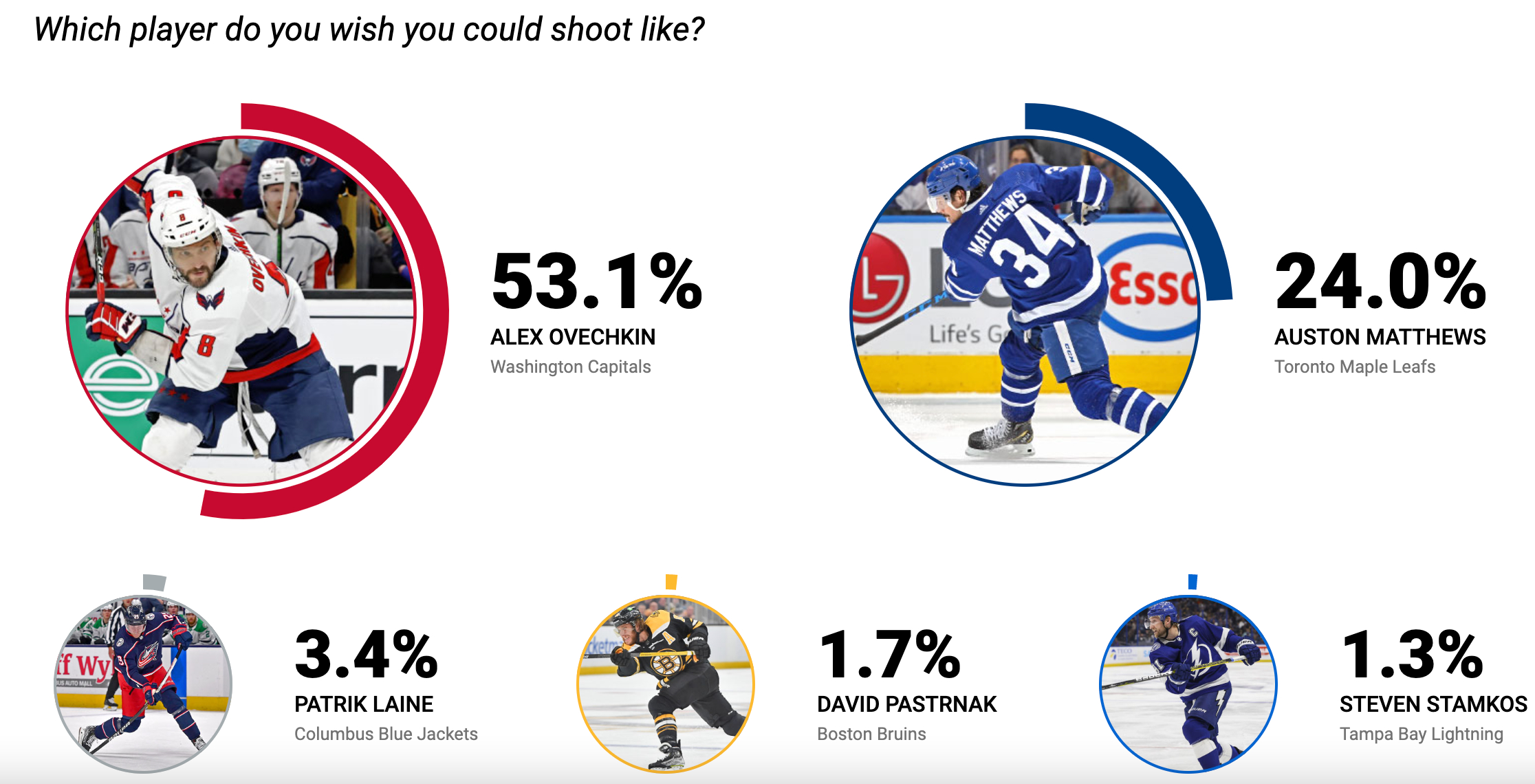 Backstrom was voted the third-best passer in the league at 15.4 percent, finishing behind Leon Draisaitl (17.7 percent) and Patrick Kane (15.6 percent).

He reached the 50-goal mark again this season, but he knows when to pass the puck, too.

Leon Draisaitl (@edmontonoilers) moved into first in this season’s #NHLPAPlayerPoll as the game’s best passer! pic.twitter.com/mNqOqGFnnn

Here are some of the other results which include an appearance from former Caps player Cody Eakin due to his, uh, memorable hair, Tom Brady, and Marie-Philip Poulin.

More results from the NHLPA Poll

Some of the sporting world’s greatest names make the cut of non-NHL athletes the players would most like to trade places with for a day, but legendary NFL star @TomBrady (@buccaneers) leads the pack. #NHLPAPlayerPoll pic.twitter.com/PzKWgfFlZZ

Many young hockey fans and players idolize their favorite athletes on the ice, and according to the #NHLPAPlayerPollSidney Crosby (@penguins) sets the best example for generations to follow. pic.twitter.com/RJJwwLJZba

He has 2 million followers between Twitter and Instagram – and you can likely find a few of his NHLPA peers among them.

The players have tabbed @PKSubban1 (@NJDevils) as the best player to follow on social media for a second time in the #NHLPAPlayerPoll! pic.twitter.com/7Jl01lhQsz

When it comes to hockey hair, the players think @CodyEakin50‘s (@BuffaloSabres) flow is the best in the league. #NHLPAPlayerPoll pic.twitter.com/TT5nBNoAkK

safe to say @jpav8 has made it in the NHL, but according to the #NHLPAPlayerPollthe @DallasStars forward could have made it in the world of golf, too! pic.twitter.com/JXBXCIFVzP

Life on the road can interfere with routine and it’s always hard to be away from family – but according to the players, an off-day in Las Vegas (@GoldenKnights) isn’t so bad. #NHLPAPlayerPoll pic.twitter.com/R1vPDD7apS

Call her “Captain Clutch” and the best women’s hockey player around. @pou29 (@PWHPA, @HockeyCanada) has a reputation that precedes her, and the players admire her undeniable talent. #NHLPAPlayerPoll pic.twitter.com/hQnLO7N0DS

Stick taps to @CentreBell (@CanadiensMTL), which continued its reputation for having the best ice to play on with its fourth time earning the nod in the #NHLPAPlayerPoll. pic.twitter.com/tRidPripXz

If his trophy case wasn’t evidence enough of his game, Sidney Crosby (@penguins) earned top spot in the #NHLPAPlayerPoll as the most complete player. pic.twitter.com/yB1BvP7K1F

A master of cradling the puck, @88PKane (@NHLBlackhawks) has been named the league’s best stick-handler in consecutive seasons by the players! #NHLPAPlayerPoll pic.twitter.com/xutPdi4rkJ

With five 100-point seasons and extraordinary abilities that few opponents enjoy facing, you know why @cmcdavid97 (@edmontonoilers) was voted the skater NHLPA members would most want on their side with one game on the line. #NHLPAPlayerPoll pic.twitter.com/W5J8EYLmW8

One game on the line?

There is only one Andrei Vasilevskiy – and the players voted the @TBLightning netminder as the one they would most want in net! #NHLPAPlayerPoll pic.twitter.com/c29W4Txvf4