What once started as a group of students earning degrees in film, public relations, and physics has now grown into four Penn Staters sharing their passion for music. Through their band, Women’s National Hockey League, the future is bright.

Since the group’s inception in the winter of 2019, Kristen Nodell, James Russin, Liam Nee, and Julie Larson have been making music and establishing their musical careers in a pretty unconventional way.

“I knew Julie from Comedy Club,” said Nodell, the group’s lead vocalist. “We would write sketches and silly songs for those shows. Then, I knew James and Liam from film school.”

While some of the members already knew one another, Nodell was the first to come up with a concrete idea for the group when she stated how she wanted to start a band in Penn State’s KLIO magazine. Percussionist James Russin was the first to respond by gracefully sliding into her DMs. And, as Nodell likes to put it, the rest was history.

But just as the newfound members were getting the band off the ground in early 2020, the COVID-19 pandemic quickly derailed their plans. That didn’t stop them from making the most of their opportunities in quarantine.

Together, the band was writing, playing, and producing their music remotely, while also working together across the country to complete their first four songs. Women’s National Hockey League also had intentions of touring or playing smaller venues in the northeast, but the pandemic had other plans. So, they played a virtual version of Penn State Student Programming Association’s NoonTime program a few times in front of a Penn State audience.

Flashing forward to 2022, the group is back to performing and expanding its identity. The group’s second EP is set to release in the next few months, too.

After winning Movin’ On’s Battle of the BandsWomen’s National Hockey League is set to open up Penn State’s end-of-the-year music festival on Friday, April 29. The group is elated to return to Happy Valley following a tough few years in the entertainment industry.

“I am so excited to share the stage,” Nodell said. “I grew up in State College, so I’m sure I will see a lot of familiar faces. It means so much to be surrounded by support.”

Russin also spoke for the rest of the group and their excitement about this new venture in the band’s musical career.

The Women’s National Hockey League certainly plans to have a big stage presence when they start their set Friday. Besides that, being one of the opening acts for Jack Harlow is definitely a boost in the experience section of their story.

While rocking with Women’s National Hockey League is currently a hobby for the four members, they would love the chance to make this their full-time job someday. The camaraderie and humor fuel each person to keep up their witty and entertaining spirit each time they step on stage.

“I really love being silly and goofy as a band,” Nodell said. “It’s fun to watch us if we’re having fun. Just have fun.”

Aside from the music, the four members have found a family in one another through their devotion, hard work, and of course, their common love for their moms.

“We didn’t know what was going to come from this,” said bassist Julie Larson. “If you are nervous about something, or if you don’t know if you are good enough, just try it, and something really cool could come from it.”

If you want to find out more about the band, be sure to follow the group on Instagram and click the Spotify link here to listen to their catalogue. 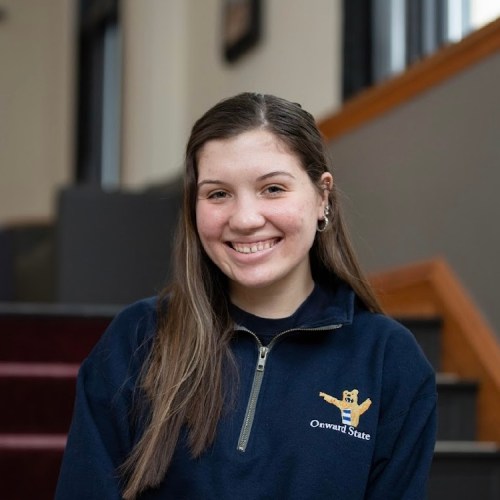 Mara is a freshman staff-writer majoring in English and Public Relations. She loves all things sports and anything that has peanut butter. You can usually find her obsessing over country music and wondering when Luke Combs will come back to the BJC. Also, Go Birds. Feel free to reach her de ella on Twitter @MckeonMara and for more formal affairs her de ella email de ella is [email protected]