When Twitter’s board agreed to sell the company to Elon Musk last week, one Wall Street bank was at the center of the deal: Morgan Stanley.

Its role in the $44bn bid caps a years-long effort to cultivate ties with the world’s richest person. The terms of the financing underscore the risks investment bankers are willing to shoulder in order to win lucrative clients in the technology sector.

Morgan Stanley, along with Goldman Sachs, is one of two dominant investment banks operating in Silicon Valley. Backing Musk’s bid and recruiting almost a dozen other banks to join signaled to Twitter investors the seriousness of Musk’s efforts to buy the company. To bring the deal together Morgan Stanley is extending financial firepower to Musk that goes beyond anything provided to other private clients.

Morgan Stanley will take the largest role in a consortium of 12 banks giving Musk $12.5bn in margin loans secured by shares in Tesla, the electric vehicle company he leads. Morgan Stanley agreed to lend $2bn of the sum.

The loan is far larger than what Morgan Stanley has offered wealthy individuals in the past. The biggest margin loans it has offered to clients through its private bank have typically been below $1bn, according to one person familiar with Morgan Stanley’s lending operations.

As collateral, Musk has also only offered a portion of his shares in Tesla. Margin loans are typically made against a more diverse portfolio of investments.

“Obviously, it’s a higher risk than your standard business transaction,” said Jill Fisch, a professor of business law at the University of Pennsylvania. “But I think there’s a potential upside to being associated with those kinds of transactions and with that kind of vision.”

Musk is further financing his Twitter bid with $13bn in debt financing led by Morgan Stanley, much of which will probably be syndicated out to other investors. The billionaire last week also sold $8.5bn in Tesla stock as he looks to fund the $21bn in cash that he has agreed to use in the deal.

In another sign of their willingness to plow money into Musk’s bid, Morgan Stanley and Japanese lender MUFG, which owns a 21 per cent stake in the Wall Street bank, had leeway from their credit committees to provide up to $14bn of the total debt package for Musk’s bid if required, said one person familiar with the matter.

Ultimately the two banks have committed about $9.7bn in financing out of the total $25.5bn in debt and margin loans to be used for the deal, according to Financial Times calculations of public filings.

The deal was complicated by the fact that Musk’s initial bid for Twitter was unsolicited. Large banks such as Morgan Stanley are cautious about working with hostile bidders for fear of angering other corporate clients. One former senior Morgan Stanley executive said bankers often have to receive approval from chief executive James Gorman to work on such deals.

Morgan Stanley and MUFG declined to comment. Jared Birchall, the head of Musk’s family office and a former Morgan Stanley banker, did not respond to a request for comment.

Whatever the financial risks and returns from the deal, such generous credit terms also reflect the allure for banks of cementing the relationship with Musk, who has a net worth of more than $200bn.

“I would estimate a dozen banks would love to do this,” said a former senior risk executive at a rival Wall Street bank. “They’re looking at this as a way to get into a super-important relationship.”

Adding to Morgan Stanley’s ability to make commitments the size of the Musk loan have been deposits that have doubled in the past three years to about $380bn, largely reflecting Gorman’s push to manage more money for wealthy clients. The deposits provide access to a cheap source of money to lend.

Morgan Stanley and Goldman were among the first New York-based investment banks to build large operations in northern California, catering to tech clients during the dotcom boom of the 1990s. The arch-rivals have since led the playing field for hot initial public offerings and takeover mandates, taking home roughly a quarter of the $2.9bn in total fees from tech M&A this year, according to data compiled by Dealogic. 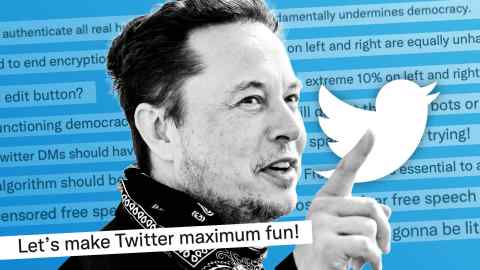 Musk has had a banking relationship with Morgan Stanley since at least May 2011, according to regulatory filings, but the $2bn margin loan offered for the Twitter bid far exceeds anything it has slowed Musk in the past. Between 2016 and 2020, Morgan Stanley had outstanding loans to Musk of between $208.9mn and $344mn.

Morgan Stanley tech investment bankers including Michael Grimes and Colin Stewart have maintained close ties to Musk going back at least to Tesla’s IPO in 2010, according to one person familiar with the relationship.

Goldman led that IPO and has also been a lender to Musk since at least 2010. The bank previously advised Twitter in its battle with the activist investor Elliott Management in 2020, and again worked for the social media company as Musk began building his stake.

When Musk in 2018 was looking to take Tesla private at $420 per share, he first tapped Goldman to help guide his bid. He later added Morgan Stanley as an adviser after it became clear he would need to cast a wider net to secure financing for the potential transaction.

As Morgan Stanley pressed its case to be involved in the proposed deal, the bank sought recognition for “being a strong resource for Tesla” and Musk over the years, Birchall wrote in a text message to the entrepreneur.

Morgan Stanley had financed Musk in the past and “come through” each time Musk’s team pressed for more credit or lower rates, Birchall wrote in the message, which emerged as evidence this month in a lawsuit emerging from the failed transaction.

Birchall told Musk the bank has also “done a lot of work for TBC at no charge”, likely in reference to The Boring Company. The appeal came one day after Musk announced he was working with Goldman and the private equity group Silver Lake on the deal.

“That seems fair,” Musk had responded. Elon Musk wants to ‘authenticate all real humans’ on Twitter. Here’s what that could mean