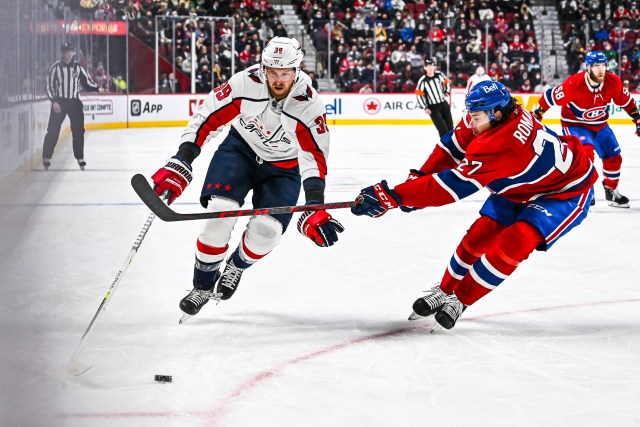 the Washington Capitals crushed the Montreal Canadiens by a score of 8-4 at Bell Center on Saturday night to draw within three points behind the Boston Bruins for the first wild-card spot in the Eastern Conference with each team down to seven games left in the regular season and the Pittsburgh Penguins for third place in the Metropolitan Division with two games in hand.

The win also eliminated the Columbus Blue Jackets from Stanley Cup Playoff contention and dwindled the Capitals’ magic number to clinch to two. They could lock up their seventh consecutive postseason berth if the Toronto Maple Leafs defeat the New York Islanders in regulation on Sunday. Goaltender Vitek Vanecek made 28 saves in the victory. 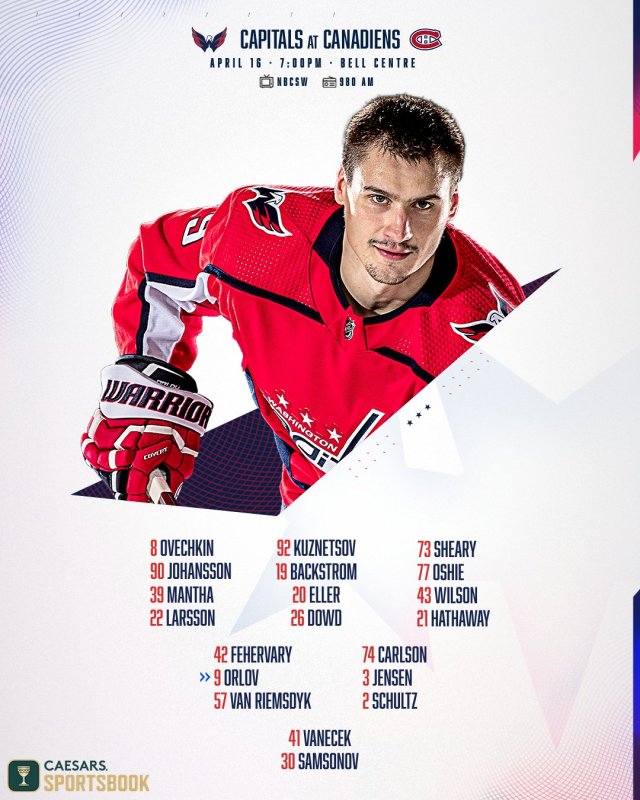 Defenseman Dmitry Orlov returned after missing the previous two games with a lower-body injury. Matt Irwin came out while Trevor Van Riemsdyk bumped down a pair.

Center Nic Dowd tipped in Orlov’s shot from the blueline at the left side of the net with traffic in front of Canadiens goaltender Sam Montembault after left-wing Anthony Mantha circled the offensive zone off an entry to open the scoring at 12:23. That marked Dowd’s 100th career point (45 goals). He became the 19th undrafted forward to reach the 100-point mark since 2015-16, his debut season.

Right-wing Rem Pitlick tucked in a rebound at the right post after Vanecek stopped a point shot off of an offensive zone draw with 5:19 left but Pitlick kicked the puck in, so the goal was disallowed.

The Capitals led 13-6 in hits, 3-1 in takeaways, 6-5 in blocked shots, and tallied three giveaways while the Canadiens earned four through 20 minutes.

Each team failed to score on one power play opportunity in the period.

Center Jake Evans blasted a shot to the left corner from the right dot after executing a zone exit and give-and-go with center Christian Dvorak to tie it 1:56 into the period.

After retrieving an indirect pass, picking up the puck at the blueline, and roaring into the offensive zone, Mantha got passed defenseman Alexander Romanov, raced to the net, was denied, but pounced on his own rebound which trickled past Montembault to give the Capitals the lead back at 8:03.

34 seconds later, Mantha walked in all alone on a breakaway and ripped one past the glove of Montembault after center Lars Eller sent him in to extend the lead to 3-1. Orlov earned his second assist of the game. It the fastest back-to-back goals by a Capital this season, besting center Evgeny Kuznetsov’s goals 43 seconds apart in the Capitals’ 4-3 overtime win over the Vancouver Canucks on March 11. Mantha has six points (two goals) in his last four games. Eller has three goals and seven points over his last five.

Off of the ensuing raw, defenseman Jeff Petry sent over a cross-ice feed to center Ryan Poehling, who had nothing but net to look at and tapped the puck in to get the Canadiens within one 14 seconds after Mantha’s second strike.

Captain Alex Ovechkin finished Kuznetsov’s pass from the goal line at the front of the net after Kuznetsov carried the puck into the offensive zone to double the Capitals’ lead with 4:24 to go in the second. The helper was Kuznetsov’s 50th of the season, a mark that he has reached four times in his career. He is just one of six players in franchise history to reach the mark as many times. The goal was Ovechkin’s first career one against Montembeault, the 159th goaltender Ovechkin has scored on in his career. In NHL history, 6,730 skaters have scored 159 or fewer goals in their careers. Ovechkin’s 159 goaltenders scored on ranks fourth in NHL history, only trailing Jaromir Jagr (178), Patrick Marleau (177) and Mark Messier (164). Among these players, Marleau ranks first in NHL history in games played, Messier third and Jagr fourth. Ovechkin ranks 81st.

The Canadiens won 53% of the draws and were held off of two power plays in the first two periods.

After center Rem Pitlick entered the zone, powered his way to the cage, and fought off Capitals defenseman Justin Schultz, Poehling finished the rebound into an open net to cut the Capitals’ lead to one 2:22 into the third.

After breaking up a pass at the defensive blueline, the Capitals executed a three-way passing play between the fourth-line that ended with right-wing Garnet Hathaway backhanding a shot through the five-hole of Montembault to restore the team’s two-goal lead 46 seconds later.

Orlov skated from the right half-wall to the slot to get away from a Canadiens’ defender with right-wing TJ Oshie approaching before ripping his 12th goal of the season to the blocker-side at 5:33. Mantha, who has 15 points (seven goals) in his last 18 games, earned his sixth career night with at least four points with the secondary assist.

Defenseman Justin Schultz ripped a shot from the right dot that ramped up off of Canadiens defenseman David Savard’s stick and past the blocker of Montembault on the power play to make it a seven spot at 9:50. Schultz has a goal and four points in his last three. With the primary assist, Orlov set a career-high with his 34th point of the season and fourth of the game.

Center Nick Suzuki ripped a shot from the right dot that hit the back camera of the net after getting a feed from defenseman Jeff Petry off of the bench to cut the Capitals’ lead to three with 5:07 left.

Kuznetsov ripped a shot from the right dot and Oshie deflected it with his skate to double the Capitals’ lead again on the power play with 3:25 to go.

The Canadiens won 56% of the draws and were held off of two power plays.