Note: This story was originally published in the May 20, 2012 Cincinnati Enquirer.

Johnny Bench played on the best Reds teams of all time, but he tries to forget being on maybe the worst Reds team ever.

This year marks the 30th anniversary of the awful 1982 Cincinnati club, which went 61-101 and remains the only Reds team with triple-figure losses in a season.

“I do remember,” Hall of Fame catcher Bench said, in a recent email to The Enquirer. “It’s hanging on the wall. It was embarrassing and forgettable. So I have.”

Bench added the abbreviation “Lol” to his email, the universal symbol for “laughing out loud.” Which is what some Reds fans did in 1982 to keep from weeping.

The ’82 Reds had a lethal combination of lackluster young players, veterans who had off-years and big-name players on the downside of their careers. Result: Last in the National League West, 28 games out.

“I try to forget everything I can about that year,” said Ron Oester, second baseman on the ’82 team. “That was the longest year of my baseball career.”

The Reds won World Series titles in 1975 and ’76 and remained strong entering the 1980s. In 1981 the Reds had the best record in baseball but did not make the playoffs. It was a strike year, and the Reds lost out because of a split-season divisional format.

1981 Cincinnati Reds:Season was a hallmark – in two ways

Some predicted the Reds could not win after losing that much talent, and those forecasts proved painfully accurate.

“We realized early on it was not a very good baseball team, but I don’t think anybody believed the depths of how bad that team really was,” said Marty Brennaman, then and now the Reds’ primary radio voice. “It was a team with a bunch of great guys, but you had guys with limited ability and guys who had seen their better years.”

Bench and shortstop Davey Concepcion were among the fading stars, with Bench moving to third base in ’82. First baseman Dan Driessen, who never quite became the next Tony Perez, also was still around.

There was pitcher Tom Seaver, like Bench a future Hall of Famer. There was outfielder Cesar Cedeno, who in Houston was billed as the next Willie Mays but in Cincinnati was about done.

Concepcion turned 34 that season. While he hit .287 with five homers and 53 RBI, Concepcion was losing the range that once made him a defensive wizard at shortstop.

Seaver, 37 years old, caught a respiratory infection in spring training and later hurt his shoulder. Seaver went 5-13 with a 5.50 ERA.

• Manager John McNamara was fired July 21, with Cincinnati 34-58 and last in the NL West. The Reds went 27-43 under Russ Nixon, McNamara’s successor.

• Clint Hurdle, obtained from Kansas City to play left field, lasted a month before being sent to the minors.

• Catcher Alex Trevino, the replacement for Bench, hit one homer in 355 at-bats.

• Driessen led the team with only 17 homers. Bench (13) was the only other Red with more than nine homers.

• Home attendance dipped to 1.3 million, the lowest in a full season since then-Riverfront Stadium opened in 1970.

• Home attendance dipped to 1.3 million, the lowest in a full season since then-Riverfront Stadium opened in 1970.

“It was a really bad situation,” Soto said. “It seemed like we lost everything. You don’t find a way to get to the ballpark. But to me it was one of my best years, even though for the team it was bad. It seemed like the guys played pretty good for me.”

Soto, now a special assistant to Reds general manager Walt Jocketty, was one of baseball’s best pitchers when the Reds were one of the worst teams. The Reds had losing seasons from 1982-84 as Soto won 14, 17 and 18 games, respectively.

“It was hard,” Soto said. “I just came to the ballpark and did my thing.”

Toward the end of ’82, reliever Brad “The Animal” Lesley provided some flair. Lesley made his debut on July 31 that year and had a 2.58 ERA and four saves, but is remembered more for his wild, dramatic gestures on the field. Lesley sometimes celebrated big outs by yelling, flexing his arms and stomping around the mound.

“I felt bad for the manager, Russ Nixon,” Oester said. “I don’t care what kind of manager you are, if you don’t have the players you’re not going to win.”

Nixon stayed on for 1983. The Reds improved to 74-88 but again finished last in the NL West, and Nixon was fired.

Vern Rapp replaced Nixon for 1984 and the Reds continued to flounder. The franchise regained life in August ’84, when Pete Rose was hired as player-manager to relieve Rapp in a 70-92 season.

Oester survived it all, and earned a championship ring with the ’90 Reds.

“We were a young team trying to rebuild,” Oester said. “It just took longer than we thought it would.”

HOW BAD WAS IT?

Journeyman who lacked power, could play a little defense.

Remembered by Reds fans as the man who replaced Tony Perez, Driessen this year will be inducted into the Reds Hall of Fame.

Best catcher ever, was not quite as good at third base.

Great speed (once stole 41 bases) but a relatively average player.

Cedeno was an elite player when younger, but by ’82 his best years were behind him.

Switch-hitter who seemingly had all the tools, he was billed as the Reds’ next big thing. He wasn’t.

Occasional power but generally did not hit for average, and not the greatest fielder.

Remembered mostly as a good pinch-hitter, Biittner finished his career at age 38 in 1983 with Texas.

Decent contact hitter, good defensively, Krenchicki was a reserve for most of his career.

Good speed but could not hit, with a notable exception being a three-run homer for St. Louis in Game Four of the 1987 World Series.

Had the thankless job of being one of Johnny Bench’s immediate successors, and never hit above .238.

Landestoy had some decent years as an Astros utility man in 1979-80 but, like many ’82 Reds, he was not much of a hitter.

Redus was an inconsistent hitter with great speed and occasional power. He twice stole 48 bases for the Reds.

O’Berry could not hit but had a good glove, which explains how he could play for six teams.

His first name was pronounced Her-MAHN. Barranca’s .290 career average was inflated somewhat by going 5-for-11 in cups of coffee pre-1982. Never played in the majors again after ’82.

Hyped as a budding star when he arrived with Kansas City in the late 1970s, Hurdle lasted 19 games in Cincinnati. Hurdle won an NL pennant as Colorado manager in 2007 and now manages Pittsburgh.

One of baseball’s best pitchers during some lean Reds years, All-Star from 1982-84.

Began as a highly regarded prospect with a big arm, but had control issues.

Billed as a budding Tom Seaver when he went 13-7 for the Reds in 1980, Pastore never was that good again.

The ’82 season was Seaver’s worst, including a respiratory infection and shoulder trouble.

Shirley’s only Cincinnati season was 1982, and he then fled to the Yankees as a free agent.

Leibrandt went on to have several good years with Kansas City and Atlanta, including a World Series title with KC in 1985.

Hume in ’82 hurt his right knee in late May, and had season-ending surgery shortly after earning the save in the All-Star game in July.

In ’82, an unhappy Kern grew a beard to protest the Reds’ rule against facial hair. Kern was traded that August to the White Sox.

Price was not flashy but had some solid years as a Red, as both a starter and reliever.

Harris was a natural right-hander but could pitch with either arm, which he did for Montreal during one scoreless inning against Cincinnati on Sept. 28, 1995. 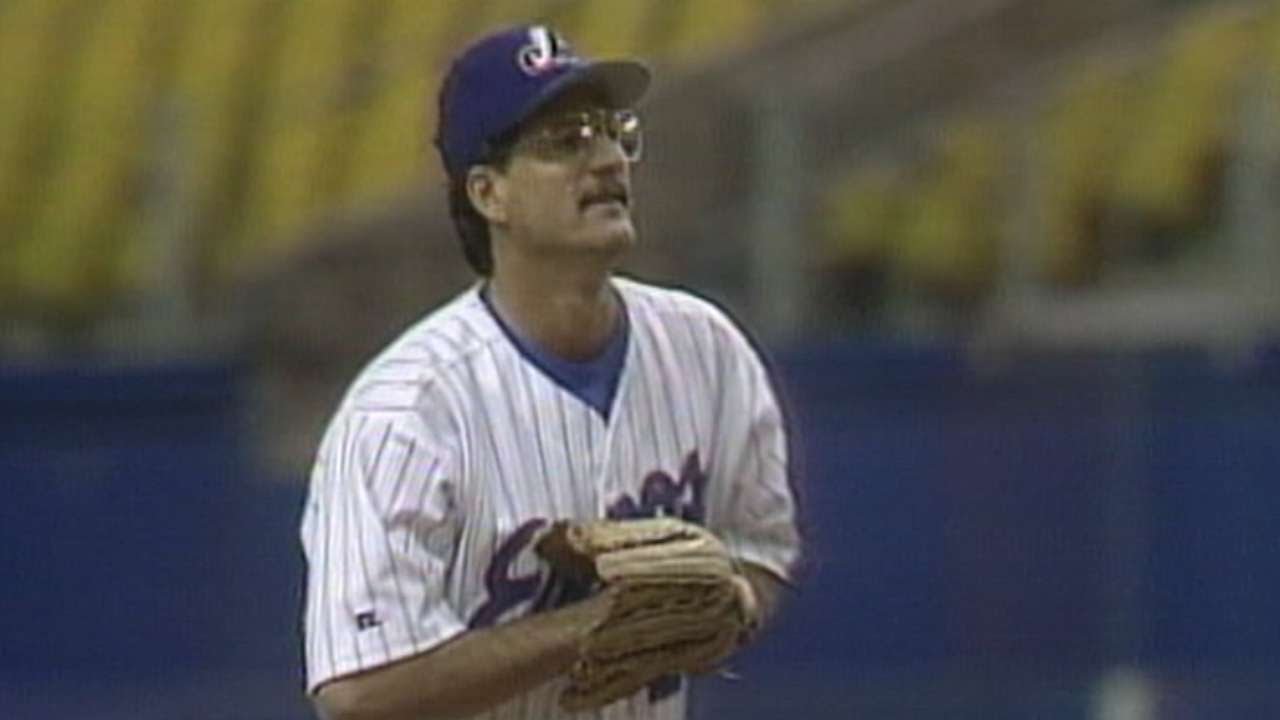 Remembered mostly for his wacky antics on the mound, a shoulder injury in 1983 contributed to a short MLB career. Later pitched in Japan.

Scherrer was a lanky lefty who had 10 saves for the Reds in 1983. Traded to Detroit in August 1984, Scherrer won a World Series ring with the Tigers.

The ERA numbers speak for themselves, with 1982 the final big-league season for Edelen.